A National Historic Landmark Since 1986

A deep respect for history surrounds you at Mohonk Mountain House. In 1869, our founder Albert Smiley purchased a ten-room inn on Lake Mohonk and expanded it into the sprawling, marvelous Mountain House we see today—now in its fourth and fifth generations of Smiley family proprietorship. Albert Smiley’s vision was to preserve a natural paradise for guests, a place to rejuvenate away from the stresses of work and city life. But Albert was more than just a hotel proprietor. In 1895, he convened the first of many Conferences on International Arbitration at the Mountain House, bringing together leaders to meet and discuss world issues. Sky Top Tower, the signature stone landmark at the top of our ridge, was erected in his memory in 1923.

To honor our history, we offer daily House tours, feature our Victorian decor and vintage artwork, and operate the Barn Museum, which provides a step back in time—showcasing 19th-century carriages, antique farm and kitchen equipment, and blacksmith demonstrations.

Over the decades, distinguished visitors to the Mountain House have included five U.S. presidents, naturalists, theologians, business leaders, actors, artists, musicians, and more. Each embraced many of the same activities that guests enjoy today—swimming, carriage rides, golf, and a love of the natural world around us. As our guest, you’ll become a part of our family history, and Mohonk Mountain House will become a part of yours. The Building and the Land

While the early story of the Mohonk Mountain House begins with two identical twin brothers, Quakers Albert and Alfred Smiley, the story of Mohonk itself starts much earlier. Upon the recession of the glaciers, a lake was formed and people began to migrate into the beautiful land, the first of which being the Paleo-Indian, followed by other Native American groups. Mohonk is said to be a Native American word referring to the large rock we call Sky Top. For centuries, Native Americans populated the area, hunting in the Shawangunks and crossing its ridges on long-established footpaths. The 300-foot-high cliff bluffs formed a barrier to European settlement on the mountain until the late 1700s.

In 1869, Albert, principal of the Friends Boarding School in Providence, Rhode Island, was seeking a place in the countryside to retire. In September of 1869, his brother Alfred felt he had found the perfect location. On an outing to Paltz Point, now the site of Sky Top Tower, Alfred was so taken by the stunning vista he telegraphed Albert and implored him to make a visit. Initially claiming he was too busy, Albert relented and made the journey that would chart the course of the rest of his life.

A ten-room inn, Stokes Tavern stood at the time on Lake Mohonk. Albert purchased the tavern and the surrounding acres with $14,000 in savings, $300 contributed by his wife Eliza, and a $14,000 bank loan. The era of Mohonk Mountain House had begun.

The ten-room inn was renovated and expanded, and the Mountain House underwent a grand but gradual conversion to the place we see today. The facility opened with accommodations for 40 guests in June of 1870. Over the years that followed, rooms and buildings were added, then torn down and rebuilt as the need to grow larger became paramount. The current Dining Room was completed in 1893, the Lake Lounge and Parlor in 1899—both with electricity, so changes have been minimal in these areas. In 1910, the Dining Room Circle extension was completed, and this marked the end of additions to the Mountain House until the modern era. At its highest capacity, the Mountain House boasted 300 rooms (currently 259). The Victorian ambiance of the decor and furnishings has been maintained since the Mountain House’s inception.

The Look of the Mountain House

There is no single architectural style reflected in the sections of the Mountain House. They are, from south to north, the Spa wing, the Rock section (so named because it sits on the rock cliffs), the Stone building (as the walls are made of hand-cut stone, making them appear “castle-like”); the Central building (including the Lake Lounge and Parlor); the Grove, and the Dining wing. Using various materials (stone was an early favorite due to concerns about fire safety), they contribute to an eclectic mix of styles that helps achieve the near magical look of Mohonk Mountain House.

New additions to Mountain House facilities include the Conference House, constructed in 1990; the open-air Victorian Pavilion, built in 2001 for ice-skating in the winter and events the rest of the year; and the Spa wing, including an indoor heated swimming pool, fitness level, and The Spa at Mohonk Mountain House, completed in 2005. Grove Lodge, the perfect accommodation for gatherings—families, friends, and corporate guests—opens in 2016. 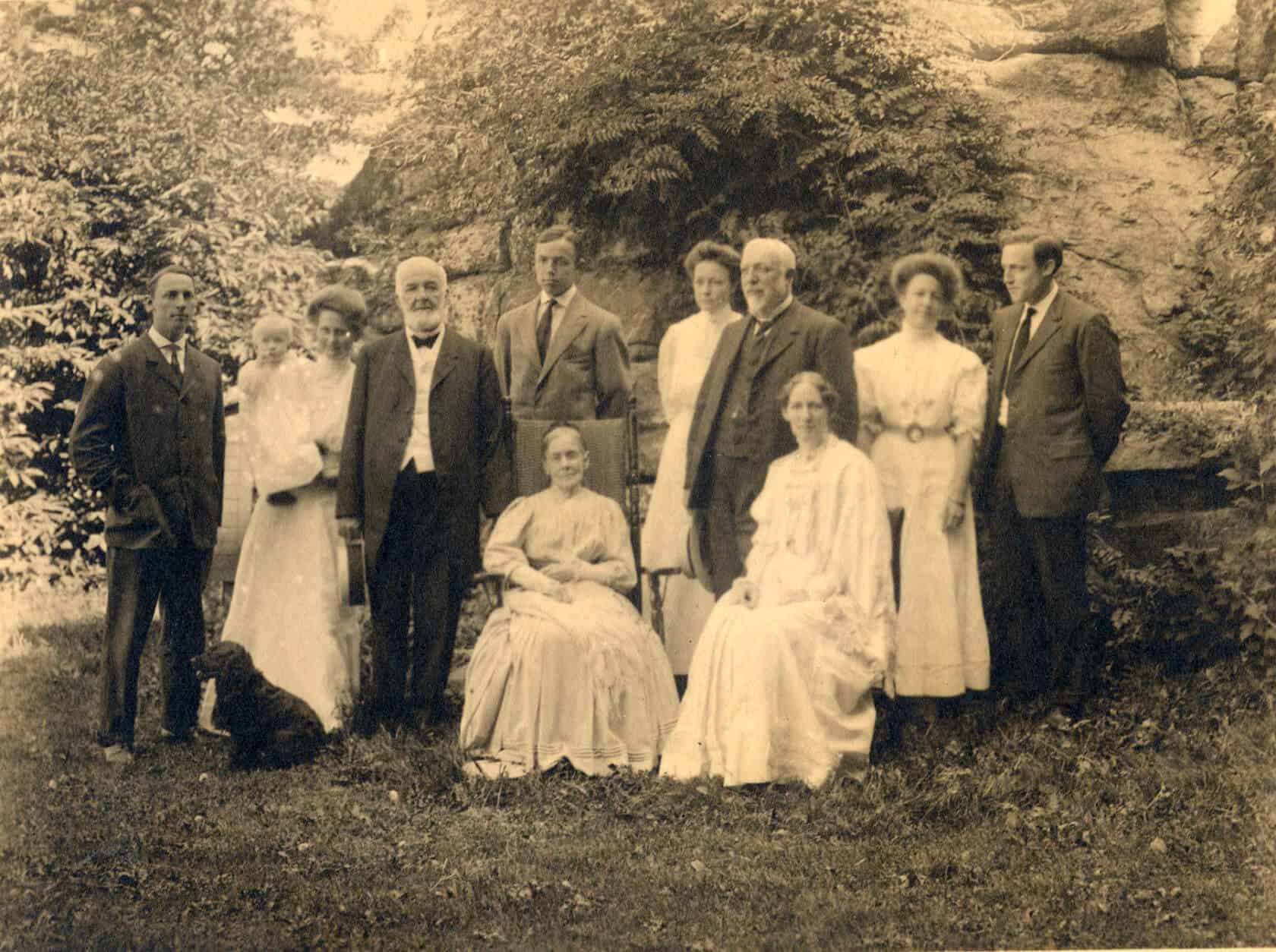 The Smileys have owned and operated Mohonk Mountain House since Albert Smiley’s original purchase in 1869. For nearly 150 years, six generations of Smiley family members have devoted their talents to ensure that Mohonk continues to thrive and carry forward its values and traditions.

Daniel Smiley (1855-1930) the younger half-brother of founder Albert, was a key figure in the entrepreneurial development of Mohonk’s buildings and grounds and overall financial survival.

Mabel Smiley (1883-1972) was instrumental in managing the housekeeping department, and advising on matters of employee relations.

Rachel Smiley (1895-1993) a musician and charming hostess, added her abilities to the Mohonk’s cultural endeavors.

Ruth Smiley (1910-2004) was tireless in her efforts to interpret nature for guests.

Albert K. Smiley, III (1944-2018), affectionately known as “Bert,” served as President and CEO of Mohonk Mountain House from 1990 to 2018. He was the great-grand-nephew of Mohonk’s founder. During his tenure, Bert oversaw various capital improvements such as the addition of the Ice Skating Pavilion, Spa Wing, and Grove Lodge.

Today, Eric Gullickson and Tom Smiley, both 5th generation Smiley family members, are currently serving in a co-leadership model as President and CEO, respectively. The two cousins have a combined tenure of 25+ years on the management team of Mohonk Mountain House. Eric and Tom are thrilled to be continuing the tradition of family leadership. Mohonk Mountain House is located in the Shawangunk Mountains, designated by The Nature Conservancy as one of Earth’s “last great places.” When Albert Smiley purchased the Mountain House, the grounds were largely untamed wilderness. Herculean efforts were required to create the system of carriage roads and trails that are still in use today. Albert Smiley was a passionate gardener. He and the early groundskeepers trucked in tons of soil and applied near-infinite patience to establish the Mohonk gardens. These gardens were influenced by the English style of landscaping of the mid-19th century.

Preservation
Beginning with Albert, the Smileys began a process of land acquisition, buying up surrounding farms in an effort to preserve a pristine area around the Mountain House, free from development. Guests engaged in hiking and carriage rides throughout this property, enjoying stunning vistas such as those seen from Copes Lookout and Eagle Cliff Road, as well as Sky Top with its views of six surrounding states. A belief in the beauty of nature motivated these acquisitions. Preservation was further enhanced in 1960 when the Mohonk Trust was established; the trust later became the Mohonk Preserve, a non-affiliated sister organization to the Mountain House, which is now the largest visitor supported nature preserve in New York State. Mountain House guests have access to 8000 acres of Preserve land, 1200 acres of Mountain House land, and nearby state park lands, for access to a total of over 85 miles of hiking trails.

Rock scrambles such as the Labyrinth (with its famous Lemon Squeeze) have been popular since the early days of Mohonk, allowing guests from all eras to navigate these remarkable tunnels and fields of boulders. Rock climbing was a popular activity at Mohonk, and has been reestablished for Mountain House guests through the guidance of Alpine Endeavors. Mohonk’s naturalist and Recreation staff also lead groups in outdoor activities. Carriage rides, horseback riding, and mountain biking are available on the many carriage roads throughout the property.

Lake Mohonk is a glacial lake, fed from sky water, not from nearby streams. It stretches a half-mile long, and is 61 feet at its deepest. The lake is stocked with trout (perch, sunnys, bass, and pickerel can also be found). There is swimming at the beach, and guests enjoy canoeing, boating, and paddle boats. Dotting the majestic cliffs and the carriage roads are over 125 scenic summerhouses, a mainstay of the Mohonk experience since the early days.

The love of nature that prompted Albert Smiley to purchase the Mohonk property has been borne out through a commitment to eco-friendly practices. These include a staff naturalist, and many nature and interpretive programs, guided hikes, and lectures. Our Hiker’s Holiday theme program is over 70 years old. We engage in recycling of paper, glass, aluminum, soap, office computers, batteries, and fluorescent bulbs. The grounds use an integrated pest management system to reduce the use of pesticides. We have an environmentally-friendly wastewater treatment plant and an extensive composting operation. In the construction of The Spa at Mohonk Mountain House, more than 600 tons of excavated rock was recycled back into the walls of the building. Additionally, the Spa employs a geothermal heating system, reducing emissions.

Mohonk Mountain House was designated a National Historic Landmark resort in 1986. This designation was unique in that it encompassed not only the Mountain House but also 83 other Mohonk buildings of historic significance, along with developed and undeveloped land.

In 1994, Mohonk Mountain House was awarded a commendation from the United Nations Environment Programme, recognizing the Smiley Family and Mohonk Mountain House “for generations of dedicated leadership and commitment to the protection and enhancement of the environment and for their inestimable contribution to the cause of peace, justice, and sustainable human development.”

Since the inception of Mohonk Mountain House, the Smiley family has been committed to sustaining the natural environment and engaging with thought-leaders from around the globe on various issues of importance for the time.

In 1963, The Mohonk Trust was founded by Smiley family members and Mohonk friends, as a not-for-profit land trust, with goals related to the family’s long-held land stewardship concerns and preservation of open space. This private nature trust is known today as Mohonk Preserve.

In 1980, Albert K. Smiley, Jr. established Mohonk Consultations to carry on the Smiley family tradition of bringing people together to discuss the interrelationships of all life on earth, with emphasis on the sustainable use of the earth’s resources.